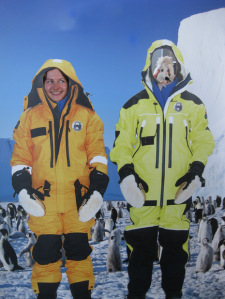 Last week something very special arrived for me in the post. It was a
grubby off-white colour, and somewhat resembled a poodle. Christened
‘fluffdog’, this crocheted bottle cover, courtesy of wastebusters, has
certainly had an interesting life thus far, coming around the world via
South Africa and Ireland. Having crossed the equator, it seemed that
Fluffdog’s next mission was to get closer to the poles. Being a dog makes
such a goal difficult.

While huskies once provided the main form of locomotion in both polar
regions, these days there are no dogs in Antarctica. They were phased out
in the early 1990s, when new rules about introducing non-native species
came into effect. Goldfish, pooches, and any other introduced animals
were shipped out – humans being the only exception. Unsure quite how to
break this news to the crocheted canine, I did the next best thing,
shutting the grubby character in the freezer overnight. This snap-freezing
served the dual purpose of ridding Fluffdog of any residual biohazardous
greeblies, and neutralising the surprisingly authentic doggy odour
emanating from the fibres.

Unpleasant as it may be, I have to admit I have missed the smell of wet dog
whilst I’ve been away down south. There’s something comforting about a damp
dog steaming by the fire as the rain drums poems on the roof. (Come to
think of it, rain is something else that has been absent all summer – and
not because of drought in my case. Antarctica is the driest continent of
all, and any precipitation falls as snow). Fluff dog was reminder of home,
where such scenes are possible, and where the dogs still come just about
everywhere with us. There’s even a hitching rail at the local pub for our
pooches, which is fair enough – when you think about the hard work that so
many dogs have put in to make NZ what it is today, they deserve a large
communal saucer of water to quench their thirst.

Now the work of one dog in particular has been immortalised in the very mid
Canterbury town where my dog currently lives. With the recent unveiling of
a the police dog Rajah, Methven has a dog sculpture to rival the best. It
puts the town in a class with Tirau, Hunterville, and Tekapo, and
offers the chance to open a conversation about the roles working dogs have
played in NZ over many years. It also offers an irresistible photo
opportunity – someday soon Fluff Dog will be back to have a portrait taken. 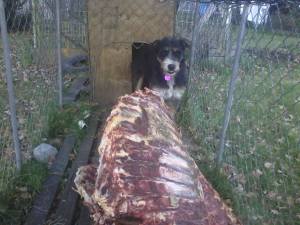 The other day a friend mentioned that he had a bone for our dog. Like most pooches, our pup enjoys a good chew on cartilage and canon bones every now and then. Last time we were up in Auckland we stopped by the butcher to grab a few off-cuts, and the fist-sized chunks kept pup busy all holiday. We smiled, said thank you for the offer, and were on our merry way.

By the time we arrived home, our friend was nowhere to be seen, but he’d left a calling card that was hard to miss: one dead cow in the middle of the lawn. The carcass was midway between the dog run and the washing line, positioned like a garden sculpture, which, had it actually been more avant garde, would no doubt have been entitled ‘Lady Gaga’s Coat Hanger.’

If Carrie Bradshaw wannabes in the big smoke are said to desire a walk in wardrobe in which to store their hundreds of pairs of business stilettos, this was the canine equivalent. The cavernous ribs dwarfed the dog for whom it was intended, and she could walk in alright. In fact, once she’d done so we didn’t see her for another three days. This was actually the closest she’d ever come to anything that moos – usually she’s off in the other direction at the slightest whiff of a cowpat – but she more than made up for lost time.

The arrival of the cow also turned out to be a great lesson in anatomy for pup, but not in the scholarly vein. Instead, she slowly learnt that her eyes are bigger than her stomach – slow being the operative word. In the end we had to relegate the cow to inside the dog run and the dog to outside, in the interests of stopping our pet’s tum from ballooning out any further. One bite more and we would’ve been in real danger of losing her as she drifted up into the wide blue of a Canterbury sky.

Coming from the city, Methven remains the only place I know where a friend dropping off a ‘dog treat’ means you come home to find a dead cow in the garden. It is also one of the few places where such behaviour is considered socially acceptable. Up in Auckland, carcasses stay firmly out of sight. Dog treats come from New World and are no longer associated with the original animal, nor with the cuts of meat the beast provided for human consumers. Down here things are much more open, for better or for worse. One may question whether all this talk of death might be a bit much for a vegetarian ex-Aucklander to stomach, but I’m still leaning towards the former. The cow was definitely fresh, and we’ll not be needing any more dog bones for a good while yet.

At what point does a chicken on your lawn become your chicken on the lawn? This is the question we’ve been faced with in recent weeks, as a rather handsome hen has taken up residence in our driveway and made itself quite at home. While it has been strutting about our front lawn for some time, it was only last weekend that we really became properly acquainted thanks to the intervention of Mya, our dog.

Mya’s brand of dog food proudly proclaims ‘our number one ingredient is chicken!’ but knowing where your food comes from can be a painful experience, and in an altercation between pup and the chook, the bird defintely came out better off. Heading outside to an awful racket that would have made Chicken Licken proud, we found Mya on the wrong side of the hedge and the chicken nowhere to be seen. No number of dog biscuits could coax our pup back through the fence, so having retrieved her the long way round and finally ascertained the location of her escape hatch, we set about sealing off the hedge with a roll of chicken wire. Then, as we were cable tying the last section to the stake, something caught my eye. It was black, feathery, and wedged right into the passage where our puppy had been practicing her Houdini skills. Could it be the chicken?

Not having had much experience in the art of handling hens, I was not entirely sure how to go about picking it up. Approaching it from what I assumed must be behind I attempted to grasp the chook like a rugby ball, but I clearly didn’t pay enough attention in high school PE class, because my grip didn’t last long. Then again, standard issue rugby balls don’t have beaks and claws that suddenly sprout from unexpected places, and the creature I encountered certainly did. It turned out this wasn’t a headless chicken at all, but a sleeping one, and one that was very vocal in its annoyance about having been woken up. Having experienced the wrath of this chicken first hand, I can now understand why Mya was most reluctant to return through the hole in the hedge and risk another run in with the feathered beast.

These days harmony has been restored, with the chicken staking out the front yard and Mya confined to the back. In fact, I would be quite happy to wake up to the farmyard warbling if it wasn’t the symptom of a larger trend. In the past few weeks we have had several lost dogs take refuge in our garden, and dinner table talk has been turning with alarming regularity to the possibility of adopting an alpaca. When I came home to find a trademe auction for kune kune pigs open on the desktop machine, I actually had to go and check that Old MacDonald hadn’t snuck in and taken up residence in our spare room. Four legs may be good, but in the context of our current place, two legs are definitely better. The chook can stay.

Lying in the sun, being served dinner in bed and mucking about with a posse of good friends… it sounds like a radio station’s tropical holiday prize package, but this is the life of our dog.

When we moved into our house, we could hear the pitter patter of puppy paws long before we were joined by a canine companion. It took some getting used to the idea that we did now have space for a pet, and the square of turf that passed for a lawn in Auckland paled in comparison to the quarter acre section now at our disposal. Suddenly we had room for a proper dog, not the handbag variety. Enter Mya.

With a pup in tow, a whole new world opened up. The anchor shaped structure protruding from the wall of the local supermarket identified itself as a hitching rail for four legged friends, and we became intimately acquainted with our local stretch of the RDR, which at times resembles a canine speed dating club. Then there was the social impact. In a place where just about everyone knows everyone else, they definitely know your dog. We thought we were being mistaken for Royals for a while because of the plethora of friendly waves whenever we went out for a walk. It turns out it wasn’t blue blood that attracted the attention, but brown and white fur.

Our first outing with pup was to the A&P Show. Most city dogs in Auckland do get to see the odd sheep or cow grazing on one of the many volcanoes, but the closest they get to them is when they chow down on a slice of dog roll. Having just been picked up from Christchurch, Mya got a crash course in the full range of prizewinning stock and a stern lesson on what not to chase. Stock proofing is one thing, but traffic training our pup has proved to be a bit of a challenge in Methven, largely because of the lack of cars. A visit to Auckland went some way towards rectifying this, although after waiting a good ten minutes to cross a four lane highway, we decided it was easier to go for a walk in the park instead.

On a recent trip to Europe I observed yet another different take on dogs, with the attitude being that it was fine to take them anywhere. Sure, there were disclaimers advising owners to lift them onto the escalator and carry them into the chemist, but whether you were heading to the local café or travelling interstate on the rail network, dogs were not far away. They were, however, on leads and lacking the free range element that makes Mya’s face light up every time we take her for a run. While living in Canterbury does mean that our pup is not likely to learn to operate an elevator anytime soon, in the bigger scheme of things I don’t think she’s missing out on much. Dogs around here have got it pretty sweet.