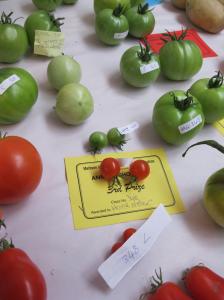 When I lived up in Auckland, the word ‘show’ carried connotations of a night out at the theatre, or a laser light projection on the downtown ferry building. Sparkles and spectacular were in; tractors, not so much. Since moving south, the word ‘show’ has variously been prefixed with ‘quilt’, ‘dog’, and of course ‘A&P’, widening both my horizons and knowledge of rural necessities.  This weekend the show is back, and this year, I finally know what to expect.

First, there will be a whole range of jumping-related events, featuring horses, dogs and highly coordinated kilted dancers. The intricacies of horses and highland dancing remain a mystery to me, but when it comes to the dogs, I’ve done my prep.  Volunteering at the Ashburton dog agility show opened my eyes to the range of dogs that compete, from ankle to hip height, and the many different leaping styles that exist, from the dainty hop to the mighty bound.

Next, there will be cakes on display. Fresh cakes. Despite the fact that entries must be received well prior to the event, the baked goods themselves arrive on the day. I learnt this from the Methven show, where the discrepancy between entry date and the show itself left me most concerned that my perfectly square, meticulously prepared scones would have gone mouldy come judging.

Then there are the tractors and seeds and machinery that really put the ‘A’ in ‘A&P’. Growing is an important business down this way, and there is a huge amount of science that goes into soil preparation and improving yields.  The show is, of course, a prime opportunity to put the technologies behind new agricultural advances on display. Cue GPS integrated systems, shiny new imports, and a yard full of lads looking as gleeful as kids in a lifesize lego playground. Throw in the odd hotdog stand and you’re sorted.

The closest that I ever got to an agricultural show up on Auckland was the time I stopped by the carnivorous plants expo one Sunday morning. I have a feeling we were the first visitors of the day, because the plant-rearers waived the entry fee and plied us with specimens of NZ native bug-eaters to take home to our flat and nurture up to competition size for the next year. Which of the dozen native insect-eating varieties they were I couldn’t say, but we didn’t have an ant problem that summer, that’s for sure.

Neither did we have the carnival atmosphere that comes with the annual A&P event. Rural shows may be less cabaret and more field day, but there’s more than enough entertainment behind those gates to keep even a thespian-loving lass from the city entertained for the day. What are you waiting for? It’s showtime!