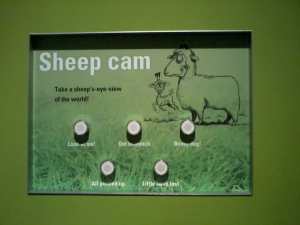 This week I visited Wellington, seat of Parliament and home of winds that put even our gusty Nor’Westers to shame. Sometimes regional parts of NZ can feel like the bigwigs at the Beehive don’t even know they exist, but a visit to Te Papa proved that Mid Canterbury does have a place in our capital city. That place is halfway up the third panel of postcards on the wall outside the ‘Blood Earth Fire’ exhibition. In the midst of this collage of picturesque destinations, Ashburton’s clocktower stands tall and proud, nestled between Coromandel and Cambridge. Even the Canterbury plains get a look in, the aerial shot of their patchwork paddocks tucked away at knee height.

Around the corner is an insight into the rural life that takes place on said plains, presented to a soundtrack of the famous ‘Chesdale Cheese’ advert. Photos of wood chopping competitions and A&P Shows from the days when long socks and walk shorts were in fashion adorn the walls, while Fred Dagg has free range over the television screen. On a more serious note, time lapse maps show the extent of deforestation that led to creation of pasture in New Zealand over the last few centuries. The maps are accompanied by the sound of crackling flames – reminiscent of the burn offs of today – as a reminder of how much of the farmland was cleared to make way for livestock like sheep and cattle.

These days dairy is a big industry for Canterbury, with our milk products exported to many countries. The marketing methods have changed somewhat since the 1950s however, as evidenced by one of the displays that featured a stuffed jersey cow with a working udder. This bovine beauty with rubber plumbing and a refillable milk bladder (accessed via a zip in the cow’s neck) was used to promote NZ dairy products in the UK during the 1950s. Taxidermy is no longer the flavour of the day, but the campaign clearly did something right, as our udders and their owners are still in demand.

Te Papa boasts many more displays, but my personal favourite was the sheepcam. Have you ever wondered what the world looks like from the perspective of one of these woolly mammals? Well, wonder no more. This exhibit features footage taken from a camera mounted to a sheep’s head. The screen is interactive, with six choices of situation available to the viewer, including ‘Out to munch’ (sheep eating grass), ‘Bossy dog!’ (sheep being herded) and ‘Little lamb lost’ (a lamb that is, surprisingly enough, both little and lost). While a local version may have nicer views of mountains in the background, they would likely go unappreciated, as sheep seem to spend the bulk of their time concentrating on the pasture below.

Between the Sheep Cam, Fred Dagg, and a taxidermy cow, my trip to the big city revealed far more about small town life than expected. Wellington may be a bumpy plane ride away, but Mid Canterbury, you need not fear you’ve been forgotten.