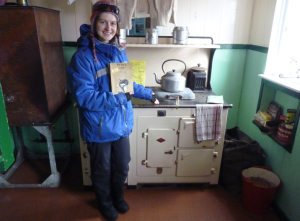 This week I find myself writing from a location that is far further south than I ever bargained for when I moved to the Mainland. Forget Canterbury’s balmy 43 degree latitude:  these days I have become intimately acquainted with the Antarctic Circle, thanks to a summer stint lecturing on a cruise ship that is South Pole bound.

Now, I’m no stranger to sea air. Auckland is the city of sails, with harbours and islands galore, and the one thing I have missed most whilst living in Methven is the ocean. Getting on board a ship that spends four out of ten days out of sight of any land appears to be the perfect antidote to any salty cravings I may have experienced whilst living in the mountains.

Nevertheless, living in a ski resort town has primed me well for Antarctica in several regards. First, the snow. Winters in Methven have toughened me up enough to be able to face icebergs with pluck and only one pair of gloves, purchased from Four Square at the end of the ski season. It’s been great to get up and personal with the kind of tabular icebergs on which our local ovine hero Shrek was shorn some years back. Not even sub zero temperatures can detract from the delight I gain from seeing guests’ faces when I tell them this anecdote from my homeland.

Secondly, wide open spaces. Both Antarctica and the South Island are renowned for their photogenic nature and their wide uninhabited expanses. Down here there is a distinct lack of sheep, famous or not, but the glacial valleys are reminiscent of an icier version of the Milford Sounds. The seals that lounge around their fringes more than make up for any woolly deficit: with several million such seals to a human population that numbers in the thousands, they far outdo the efforts of their four legged friends in the mammal to man ratio.

Thirdly, living in a small community. When I first moved down from Auckland I could not have imagined living in a town of 1000 people. Working on board a ship with just over 100 staff, a four digit population count starts to sound like the busiest of bustling metropolises. Having visited several Antarctic Bases where the tour of duty exceeds two years and the population count barely makes double figures, I have come to appreciate the new blood that floods into our area with each new ski season. Our small town will never seem small in quite the same way again.

I’ve swapped sheep for shags and pigs for penguins as I get up close and personal with the source of our biting southerly winds, but I would not swap this experience for the world. There are so many new sights and sounds to experience every day, from breaching humpback whales to the unmistakably fishy smell of penguin guano. Heading south off the map to a place where the sea and the mountains come together under snow has put life back home in perspective and made me appreciate both latitudes all the more.