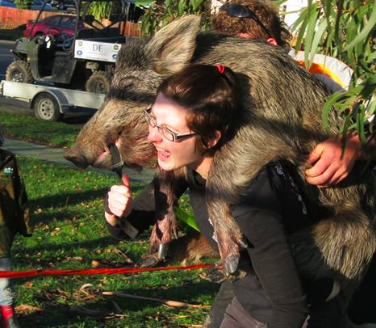 When a Topp Twin offers you the chance to shoulder a 45kg boar around an obstacle course, there can only really be one answer. At last weekend’s Mid Canterbury hunting competition, that answer was yes. Off came the floral jumper, on came ‘Horace’ the pig, and we were off.

Wearing a boar as a backpack certainly gives new meaning to the term ‘piggy back’. It’s also a darn sight harder than it looks, as I found out at the first turn. I was all set to go around the corner. Horace, it seems, had other plans, and momentum was on his side. After going very wide we struggled up the hill and down the straight to the halfway mark and around the cone. So far, so good. Falling to my knees on the brow of the final hill, I momentarily disappeared inside of Horace, but a pat on the nose saw him get back into line and we crossed the finish in the second fastest time, complete with several more bruises than we’d started out with.

I was surprised to learn that this was not a one off event, but one that youngsters begin training for before they are even old enough to say ‘Captain Cooker’. The precursor to the ladies event had seen a host of small children running round a miniature obstacle course with a dead wallaby or hare slung over their shoulders. They get them started on pest control young down this way, that’s for sure.

It was also the first time that I had seen camouflage gear in action. Boys who wear a mottled print around town tend to stand out more than anything else, but at this hunting competition the number of people sporting khaki hunting and fishing clothing made it appear as if a forest had suddenly taken root in the hotel car park. If it wasn’t for the coffee cart line spoiling the forest ambience, the deer and tahr could’ve still been at home in the hills.

While they were not green, my gumboots and thermals were put to good use, helping me to blend in amongst the crowd. Then came prizegiving. The question ‘where are you from’ is usually quite benign, and when the reply is Hinds or Hakatere, people are not likely to bat an eyelid. My answer of Auckland, however, caused a collective intake of breath so sharp that I wouldn’t be surprised if it affected the air pressure enough to show up on the national weather radar. What was the world coming to when an Aucklander could out piggyback everyone but an Irish vet?

As shocked as my mother may be by my latest sporting prowess, at least I can confidently tell her that I can not only stand on my own two feet with a pig in tow, I can also bring home the bacon to boot.